Kyrgyz Clearly have the Edge in Kyrgyzstan Violance 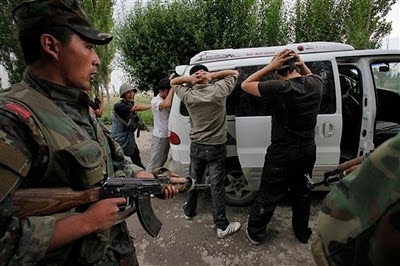 -
It is clear now thanks to the Red Cross and other relief agencies that the Kyrgyz have gained the dominant role in the "ethnic violence" that is upsetting Kyrgyzstan. The Uzbek population in towns like Osh, Kyrgyzstan are clearly living under constant threat of sniper fire and artillery blast. The Kyrgyzstan military is sending in its soldiers only to support the Kyrgyz militias and to deport the remaining Uzbeks.
-
Just like in the Serbian Genocide, the attacks by roaming militias seem to get worse with each sunset. Artillery is being directed at the Uzbek areas of town. And when the sun comes up, snipers guard the streets.
-
At the border crossings the government is stopping any ethnic Uzbeks from entering Kyrgyzstan. All the while the border guards are deporting hundreds of Uzbeks a day to Uzbekistan. The trademarks of genocide are all there.
-
Countless Uzbeks have claimed that the military, mainly Kyrgyz men, are confiscating any aid making it into Uzbek hands. Victims and onlookers have claimed watching soldiers severely beat Uzbeks over having as little as a bag of flour from incoming aid.
-
As of now, the United States has allocated 10 million dollars of aid to the country of Kyrgyzstan. It is doubtful that anybody in the stricken areas will receive a single scrap of the supplies sent.
-
Looking at the situation I would venture to guess that many Westerners will never know the "ethnic violence" ever took place in Kyrgyzstan. Many probably don't even know where the country is. And of those who do know of the violence, many will just forget about it a week after the news drops the story.
-
We have watched countless genocides occur throughout the world. Now we have the opportunity to stop one. Not only could we stop this genocide, we would at the same time stop the flow of opium and heroine our of Afghanistan. And in addition to those two liberal goals... we would help prop up Democracy in the Russian's back yard.
-
But of course "Never Again" is only a hollow slogan in the Western world.
Posted by Helix at Wednesday, June 16, 2010 No comments: 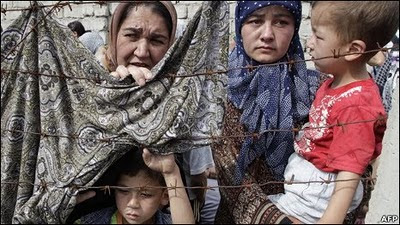 -
For nearly five days now the southern region of Kyrgyzstan has been riddled with bloody ethnic violence as the two involved parties battle it out. Both sides, the Uzbeks and Kyrgyz, make up nearly equal percentages of the local population. Yet both sides seem intent on the death of the other.
-
With a government still in its infancy, the former Soviet country is struggling to keep order. Police have now been given the order to shoot on sight as they fight for every block of local towns and villages. Burnt out cars and smouldering homes riddle the landscape as the local law sweeps through the same areas time and time again.
-
The potential for genocide here rest in the hands of both sides. If either is allowed to gain superiority over the other the fight will quickly become one sided. Once this happens the police and military will be unable to halt the blood bath that will follow. Total anarchy... absolute wholesale slaughter will follow.
-
We watched in Serbia, Bosnia, Rwanda, and countless other countries as this sorta violence spread. We know the pattern. We have the calling cards on hand when it comes to Kyrgyzstan. And yet once again the UN and its buddies in Russia are not about to do anything to stop the "civil war".
-
As we speak thousands of Uzbeks flee to Uzbekistan... on their heels are those who seek to slaughter them. On the opposing side the Uzbeks isolate their killers in small numbers and then slaughter Kyrgyz in reprisal for previous attacks. It is only a matter of time before one side finds a way to dominate the other.
-
The number of firearms falls in favor of the Kyrgyz. The global media is in the back pocket of the Uzbeks. Maybe this time around we will get to see if the pen is truly mightier than the sword.
-
Whatever the case the facts are clear. The UN has proposed little in the way of "peacekeepers". Moscow is not going to send any more troops than needed to defend their local military bases. And all the while the Kyrgyzstan government is unable to defend the innocent and uphold local law.
-
As far as the UN is concerned, peacekeepers are only needed when Kyrgyzstan admits it is in the midst of a civil war. Until then the blue bellied Europeans aren't about to help Asian citizens. It just doesn't seem to fit their political agenda this time around... after all, who cares if it turns into genocide after all?
-
(Never again, right?)
-
What about Russia? Every since 1991 Russia has been less than willing to help its former states. Though it claims these areas as its "sphere of influence", Russia seems to want these states to collapse. And if they do succeed as independents (free of Russian influence), well then the ol' mother bear comes charging... usually with some excuse that the Europeans buy hook, line, and sinker.
-
Russia does have the troops and ability to roll right into its Asian 'colony'. It could even stop the violence with its almighty presence on the battle field. And the locals in southern Kyrgyzstan even openly admit that they would love to be part of Russia. Yet Moscow sets and watches as the once loyal subjects starve and bleed out.
-
For now Alder's Ledge will be filtering information through as I can find it. The media seems to be slanted as usual and it is taking some time to decide if a story can be trusted or not.
-
So as of date I, the Grand Fuba (ph-oo-ba), would predict that the coming genocide will be mostly perpetrated by the Kyrgyz side. But as I said, trustworthy information is hard to come by. So I will continue to post information on this story as it travels to the West.
Posted by Helix at Tuesday, June 15, 2010 No comments: