Too Jewish for Politics


-
During the era of snipers in Sarajevo it was hard to believe that any man could stand up to the genocidal Serbian militias. Yet this is exactly what Jakob Finci managed to do. In fact he even managed to get around 3,000 potential victims out of the city and to safety. And to add to this, Jakob was one of the few people who managed to bring medical supplies into the city as the snipers laid siege to Sarajevo.
-
Bombs and mortars could not stop Jakob. His will to survive drove him onward as he saved the lives of countless Bosnian civilians. It was this aspect that made Jakob a national hero when the war ended. It was this dedication that had earned Jakob the respect of his nation.
-
So why is the hero being banned from the Bosnian House of Parliament or the House of Presidency? For being a Jew.
-
During the Second World War the Jews of the Balkans were nearly killed off entirely. Jakob was lucky to have survived, despite having been born in an Italian concentration camp. And now he faces the same antisemitic views left over from the Nazi occupation.
-
"Sarajevo will be a karakazan, a black cauldron, where 300,000 Muslims will die . . . Europe will be told to go ---- itself, not to come back until the job is finished." Bosnian Serb Leader at the siege of Sarajevo.
-
You can note from the less than enthused views of Muslims by the Catholic Serb that their views of Jews were little better. Yet in spite of this Jakob managed to work around the attacking Serbs.
-
Finally the 1995 Dayton Accord was signed and peace was supposed to be reinstated. However, the American backed plan excluded minorities from political influence (including the Jews and Roma of the region). This has led to the current fight between Jakob and his government (the Bosnian government).
-
The EU has declared that the discrimination of anybody due to their religion or race is unacceptable in a modern democracy. This means that Bosnia will have to amend its constitution before it can be considered for membership in the European Union.
Posted by Helix at Thursday, May 13, 2010 No comments:

With Australia ready to jump on the ban wagon it seems that you can't be a Muslim anywhere now days. Despite the claims that these bans are solely aimed at the infamous burqa it appears that all Islamic head-scarves are the target. This means that even the Islamic scarves designed to cover the hair and necks of Muslim women will be banned.

Traditionally Muslim women are not required to wear the full face coverings. However in hard-line Islamic states like Iran, women are seen wearing the burqa on a daily basis. And yet even in places like Iran women wear the less modest scarves. So why is it now illegal to wear any of them in France?

Public safety is a loosely worded explanation given by both the French and Belgians. Unable and incapable of justifying their claims, the governments of Europe seem ready to unite on this issue (of all possible issues).

So lets discredit that claim.

Not a single time has a terrorist tried to set off a bomb under the guise of a burqa. As of today there have been no gangs of burqa wearing Muslims roaming the streets of Europe. And not once has a single person been harmed by wearing a burqa.

Next we come the claim that the burqa oppresses women.

Once again we must look at this reasonably. The burqa is not a religious mandate. The women wearing them are not made to do so by "Islamic law". And despite claims by the Europeans, Shari'a does not state that women are to wear any covering over their face.

So here is the only logical explanation for the Burqa Ban... cultural prejudice.

With more and more immigrants moving into Europe from Islamic nations the burqa is becoming a more common sight. Not only is the burqa a common sight, but its more liberal counterparts are flourishing in Europe. The reason... immigrants usually cling to symbols of their cultural past. This means that the immigrants Europe needs to satisfy its desire for "cheap labor" are the very people bringing the change Europeans don't like (head-scarves).

Like Latinos here in the United States, Muslim immigrants are being met with a tinge of racial and religious prejudice. We Americans like tacos... we on the other hand do not tend to like hearing people speak Spanish when we ourselves don't understand the language. Hence seemingly popular desire to push laws requiring Latinos to speak and know English.

So look at it this way... how would a law requiring Latinos to speak English be met here in the US?

I would be willing to bet that relations along the border would suddenly become rather tense. And I'm almost certain that the White House would be against it.

Italy, Returning to its Fascist Past 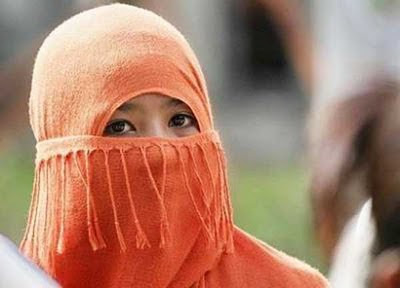 -
Battle of the Burqa Update
-

-
It will now cost Muslim women 500 to 650 euros to wear their headscarves in Italy. And once again the Italians show their love of fascism. Yet nobody seems too awful concerned, after all... most Italians are Christians.
-
Yet once again I must ask the same old questions. What stops a country from stifling the freedoms of Christians if they already oppress Muslims? And if you are going to ban one religious icon why not ban them all? Should Jews not be allowed to wear their Star of David? Should Christians not be allowed to wear their crosses?
-
It also begs the question of whether or not Islam is going to be allowed in Europe?
-
After all, Belgium and France are on their way to banning the burqa. Should the Europeans take the next step and just close off immigration to any and all Islamic nations? Or should they just start expelling the Muslims and start mass deportations?
-
OK, so those last couple questions are a bit over the edge to a rational mind. But then again the first step Hitler took toward the Holocaust seems allot similar to this "burqa ban".
-
P.S. for more information on this subject just read the previous articles on the "burqa bans" posted here on Alders Ledge.
Posted by Helix at Tuesday, May 04, 2010 No comments:

-
Your father did it...
Your mother supported it...
Your ancestors lived by it...
-
As Americans it is impossible to escape the history of "manifest destiny" in this country. Our forefathers spread this nation from "sea to shining sea" only to push the natives below the waves of whites. So it is understandable to an extent that our nation to this day looks at the end result and not how we got here. Denial is and has always been more prevalent after genocide than readily admitting our past sins.
-
In Darfur the Janjaweed spread their version of Islam by the sword... their very name hints at their intent (soldier upon horseback... loosely interpreted). An estimated 450,000 have been "converted" by the sword of the Koran since 2003. And yet the United States still exercises refrain in their descriptions of these "humanitarian crises". Even with good ol' boy Barrack Obama in the White House, the United States remains unwilling to put an end to the genocide in Darfur.
-
A look into our own past shows why.
-
Landing along the coast of Virgina we took immediately to the familiar tools of "subjugation". Even when the Native Americans out numbered us by the hundreds, we found ways to destroy them and their culture. Disease, deprivation of food and water, slaughter of their women, butchering of their men... we knew how to perpetrate the "white man's burden".
-
Eventually we pushed the natives out of our thirteen colonies. Any that remained only did so because we hadn't found a "need" for their land just yet.
-
Then came the French and Indian War. Both sides used the native peoples to carry out the dirty work of the Europeans. Like pit bulls in a ring, we watched as the "loyal allies" went to work on one another. And when the war was over, the English came out victors and their "allies" were pushed out onto the plains or exterminated.
-
Now I'm sure I have lost many of you by this point. Any that are left must think that I don't understand United States History all that well. But the fact of the matter is, no matter how you justify it, we committed genocide to get where we are today.
-
Pushing across the plains we put our trust in racist bigots like Custer. Oh if only the Battle of Little Big Horn (Custer's folly) had been his last.
-
Where the white man fell a dozen more arose like the grasses upon which they bleed. At the time our country called the natives "savages" and yet here we were butchering them like animals. And for what?
-
Farm land.
-
Onward we went. Finally the Pacific was in sight. We could rid ourselves of these "savages". All we had to do was push them into the ocean or kill any that didn't want to leave.
-
And that we did.
-
So it stands to reason that a country so divided on how they define the killing of natives would only find it harder to define any genocide. Sure we got it right when we called the mass killings of World War Two by their rightful names. Nazis were tried and put to death (all be it in far fewer numbers than those they killed). Japanese were occupied so as to see to it that they didn't rise again.
-
However, when it comes to Turkey (the Ottomans), Darfur, and a dozen others we find it impossible to condemn those acts as genocide.
-
We find it even harder to call our own past by what it was. We hide behind terms like "manifest destiny" and "westward expansion" so as to make it a little more rosy in appearance.
-
So what do we do about it?
-
Tell our government to recognize genocide whenever and wherever it happens. We should never forget the ones that happened before we knew what to call them. And we should never allow this crime against humanity to occur again.
Posted by Helix at Tuesday, May 04, 2010 No comments: